Last time you ventured into your storage closet, you valiantly attempted to organize the mass of electronics cables you've amassed over the last few decades. Unable to discern which were vital to the digital equipment in your home and which were artifacts from the days of analog, you turned to me, your humble son, the indentured servant to whom you granted life, repaying his debt through free, on-call tech support.

This is a rather dull topic so I added cats to make it fun. George and Barry were happy to help.

For purposes of simplification, I've created two categories with each category further divided into two subcategories:

(2) Useless Cables: (i) Very outdated; (ii) Unidentified, a remnant of the Age of Cable Chaos, before USB standards saved the world from a pandemic of headaches. These cables were often made for one specific item, or by one company for their products only. If we don't know what they pair with, they're effectively useless.

(1)(i) Useful Cables, Current. (Descriptions are always directly above their corresponding image).

HDMI – High-Definition Multimedia Interface. Currently the standard for video; feeds audio as well. Your TVs use these cables. 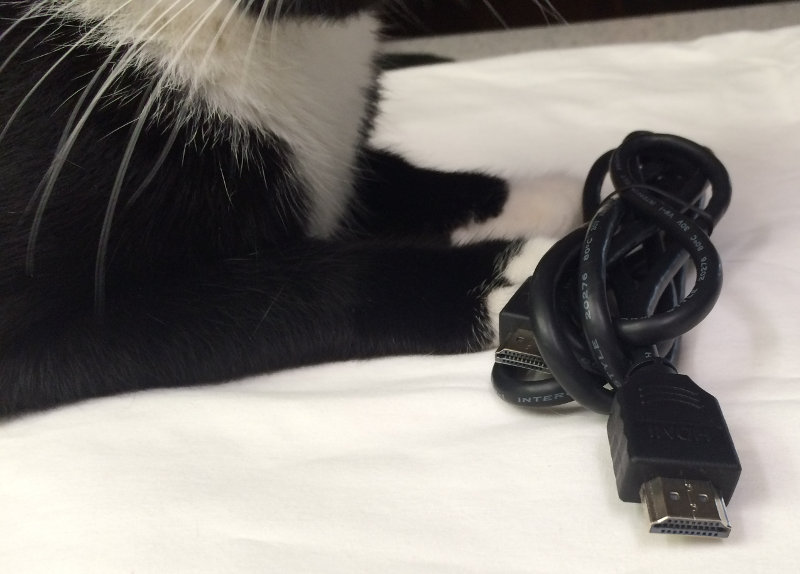 DisplayPort – a new type of video cable for very high-end televisions. Will probably replace HDMI in the future. You don't have any of these, but I'm mentioning it here for future reference. 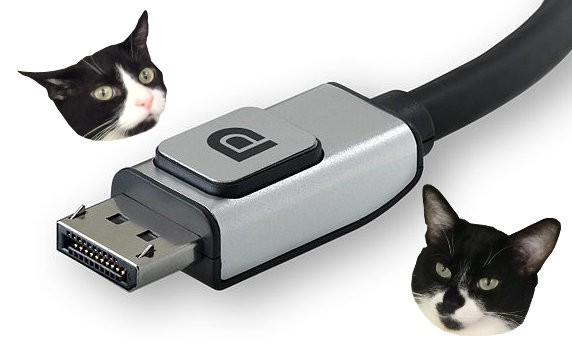 "Displayport-cable" by Belkin. This image has been edited.

USB standard-A – When you think USB (Universal Serial Bus), you probably think of the type-A connector. 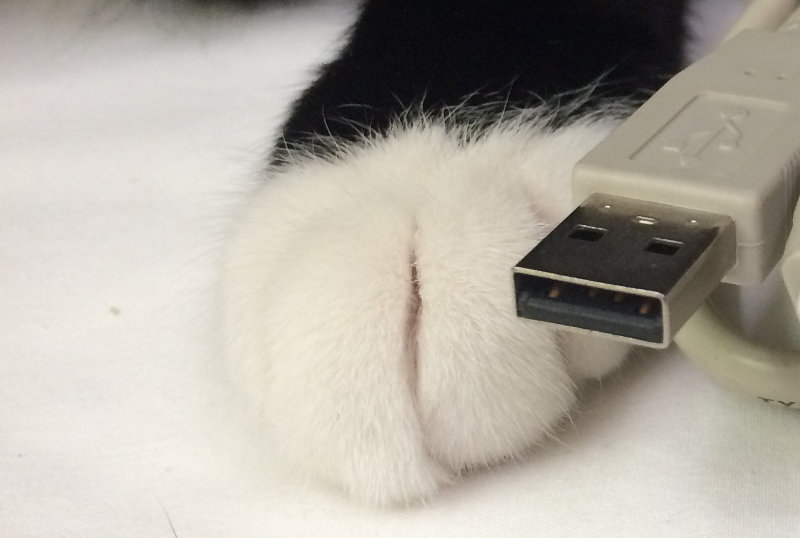 There have been three versions of USB since the interface was introduced in 1996: 1.0, 2.0, and 3.0. Each subsequent version was designed to be backwards compatible with the previous version. The difference is primarily data transfer speed. While USB 3.0 is the most recent version, the industry has been slow to upgrade due to low consumer demand, so I'm going to include USB 2.0 with subcategory (1i).

USB 2.0 standard-A connectors are physically identical to their 3.0 counterparts, but the plastic inserts for 3.0 are blue.

USB 2.0 standard-B – Used for periphery equipment, most commonly printers, but also the IR communication device you still have that is as useless as frosted-tipped hair, chokers, and other Y2K relics. 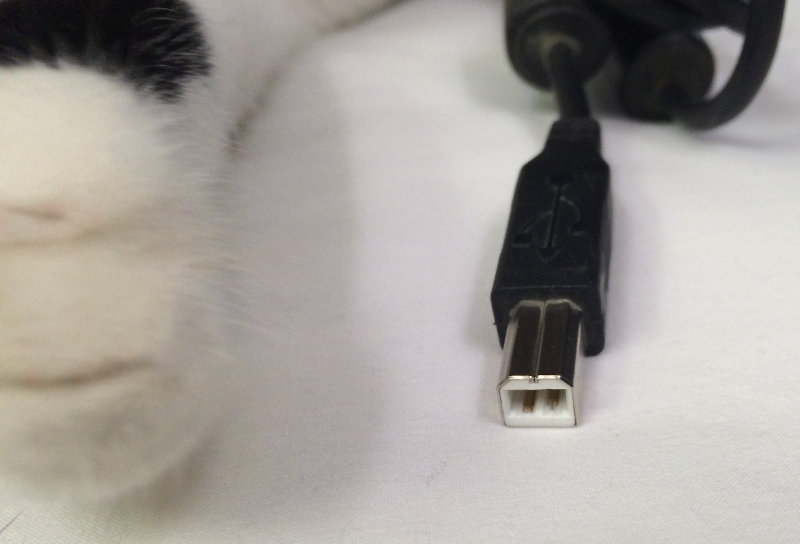 USB 3.0 standard-B – You don't have one of these yet, but you may encounter one soon. Notice the added level on top, compared to the 2.0 version. You can plug a USB 2.0 standard-B connector into a 3.0 receptacle, but not vice versa.

USB 3.0 micro-B – The awkwardly added segment is what allows for increased data transfer speeds. If you look closely, you'll see that one side of the connector is similar to the USB 2.0 micro-B connector. You can use a USB 2.0 micro-B cable to access/power a 3.0 device (utilizing only half the port; it looks odd at first), but data transfer will occur at 2.0 speeds. 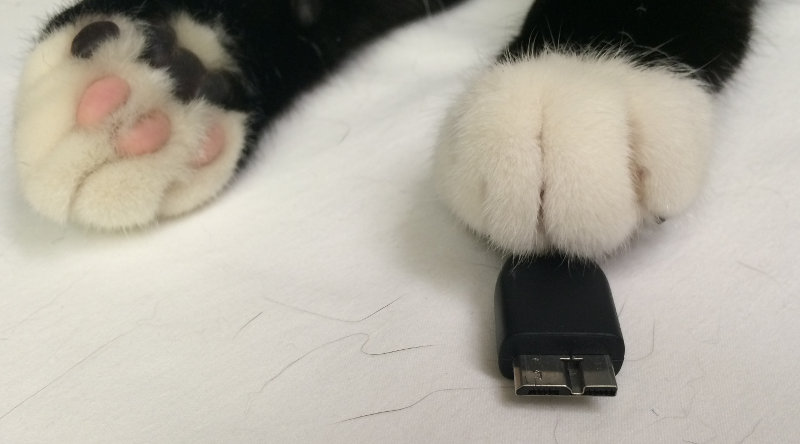 There will be a USB standard-C released this year, which will supposedly replace everything, including laptop chargers. 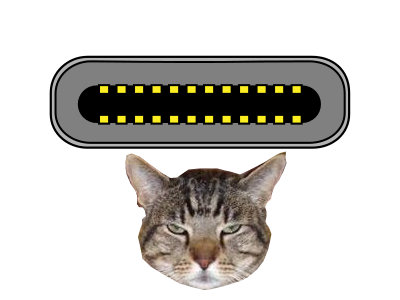 "USB-Type-C" by Andreas Pietzowski. This image has been poorly edited.

Standard power cord – Delivers electricity to most non-battery powered devices. These will probably be the standard for a long time. 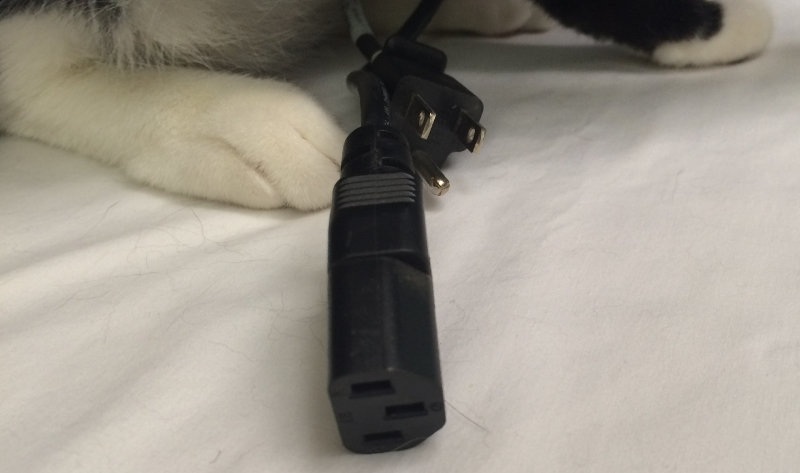 Power cord, with ground – Usually used to deliver power from a wall outlet to an AC power adapter. I really don't know why these exist; seems like the standard cord would work fine. 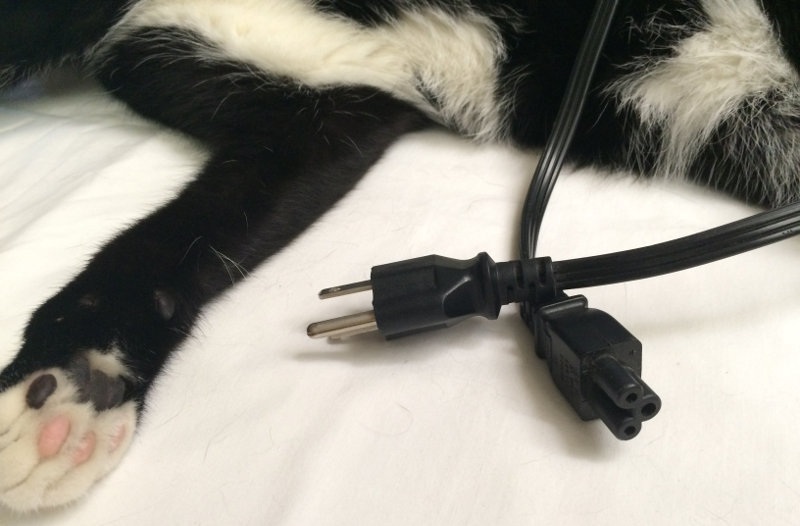 Power cord, without ground – Typically used with smaller devices, like a battery charger. 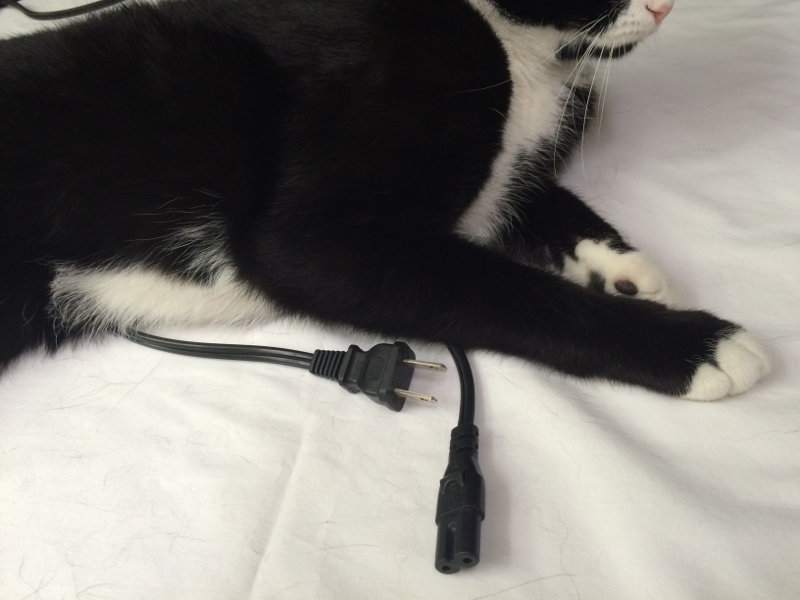 Apple Lightning – the current Apple standard for power delivery and data transfer for mobile devices. Apple is notorious for shirking industry standards and forcing proprietary equipment onto their customers. Barry does not approve of this practice.

VGA – Video Graphics Array. Once the standard for display cables, it has been replaced by HDMI. Your computer monitor receives display data through a VGA cable. 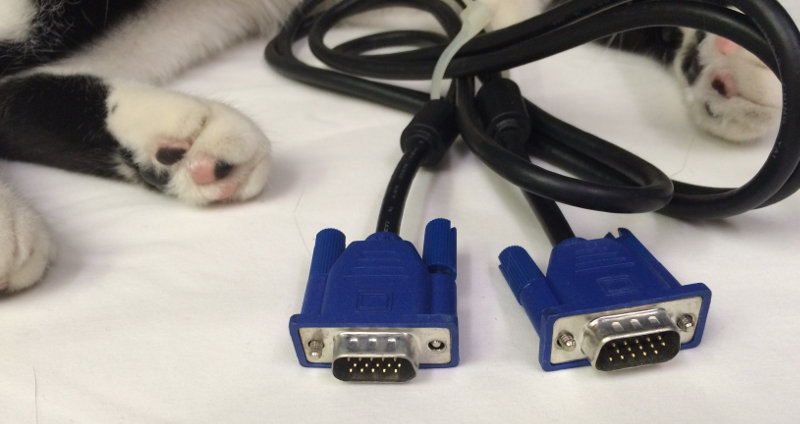 Stereo Audio/Video – These cables are long obsolete, but televisions still come with stereo AV ports just in case someone wants to hook up a VCR or something.

USB 2.0 mini-B – It may be a rash assumption to place this particular connector in the Obsolete subcategory, but it seems to have been replaced completely by micro-B. To my knowledge, a USB 3.0 mini-B does not exist. 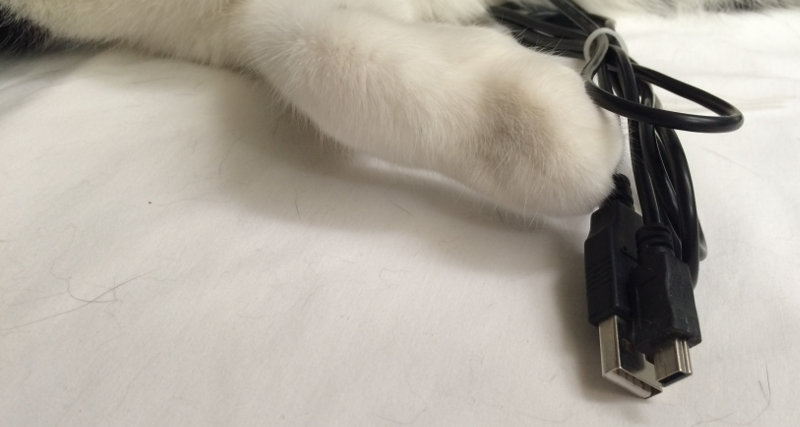 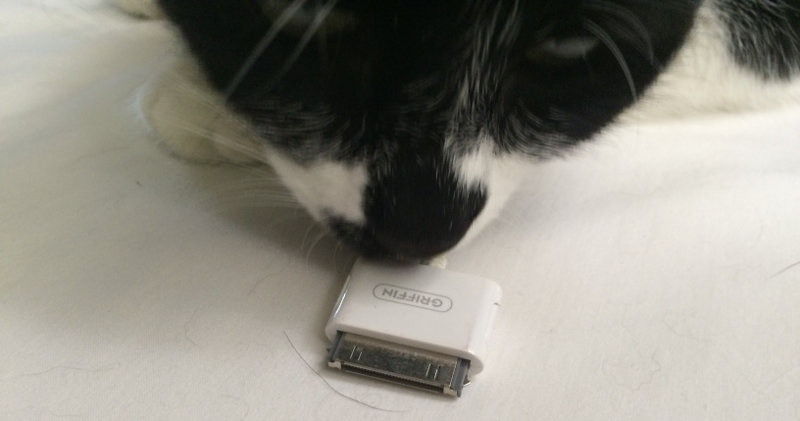 DB-25 connector – Data transfer cable. This is only categorized here because your 1994 HP LaserJet 4 Plus printer uses a USB to DB-25 adapter cable to connect to your computer. Otherwise, this cable is woefully obsolete and useless. Don't ever throw that printer away; for printing text, it's better than everything currently on the market. 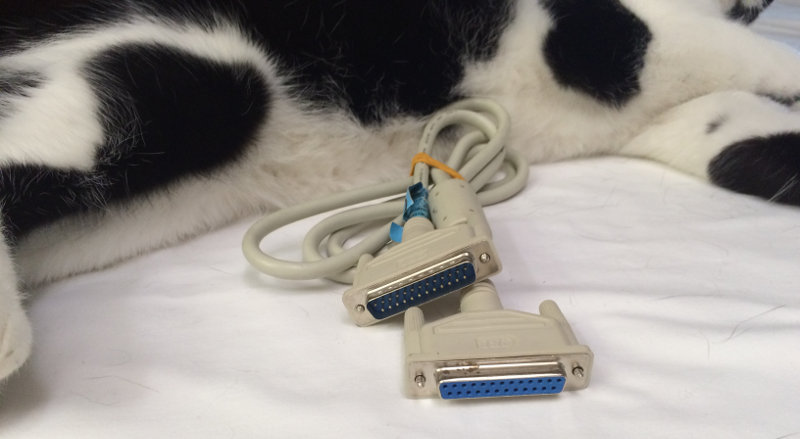 (2i) Useless Cables, Outdated. I'm not saying these cables are completely useless, but they're very old and the chance you'll ever need one is very slim.

DVI – Digital Visual Interface. DVI was created to supersede VGA, but ultimately failed following a hard-fought, valiant effort. While considered to be effectively obsolete by most of society, the interface is still preferred over VGA by people who name their cats after characters from Game of Thrones. 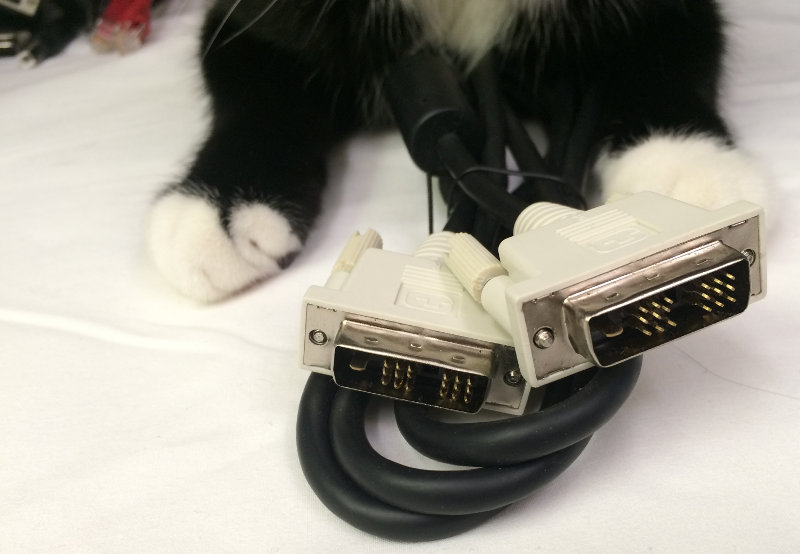 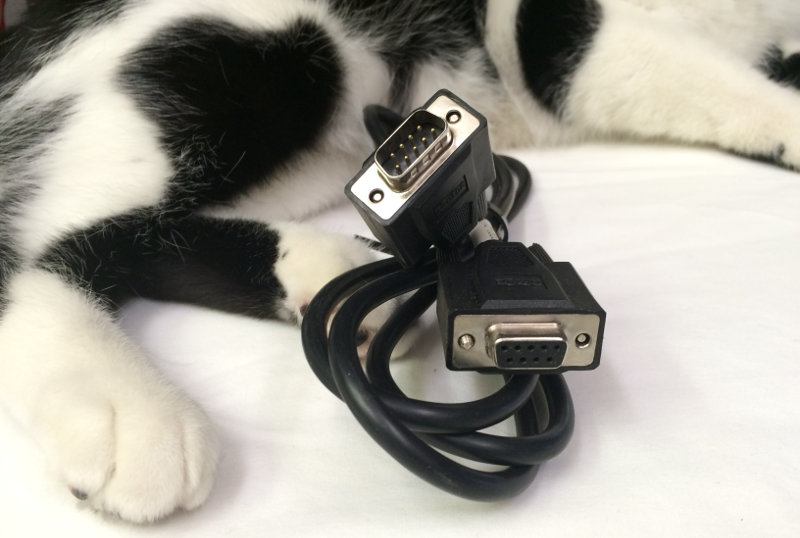 DB-25 to SCSI adapter cable – SCSI is just another interface type. It's obsolete for home use. 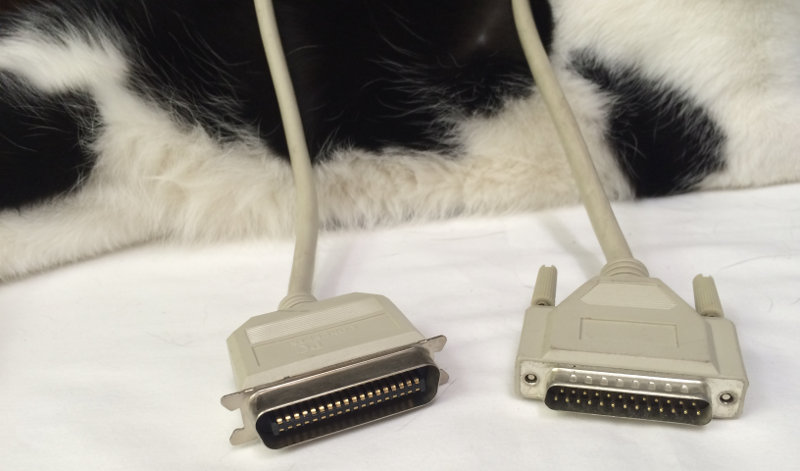 Firewire 6-Conductor Alpha – Obsolete for home use. In private settings, this connector was used primarily for Apple products. 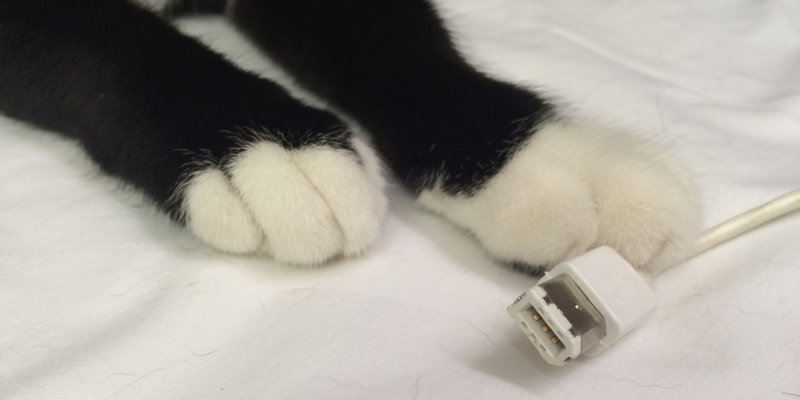 Firewire 4-Conductor Alpha (the connector on the right) 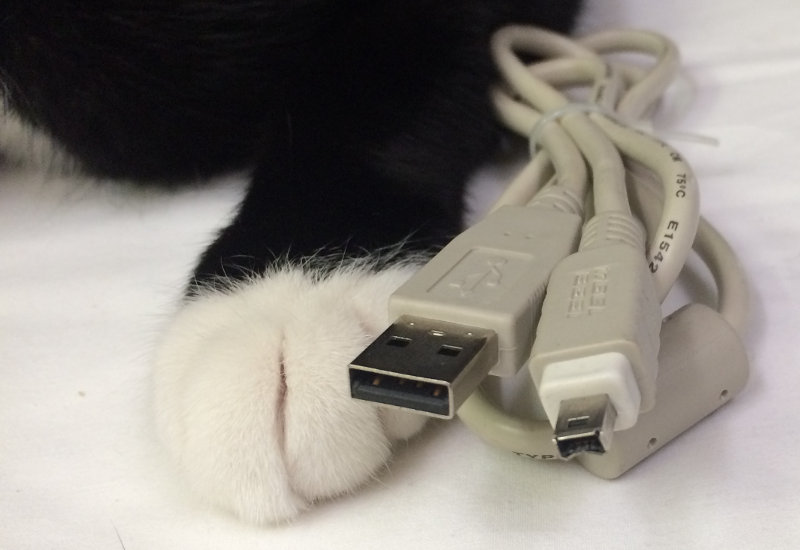 I don’t know what these go to. If you want to play the odds of finding their match, you can hang on to them, just in case.

UC-E6 – Usually matched with a USB standard-A connector, UC-E6 was a proprietary connector made by Nikon, used primarily with cameras. 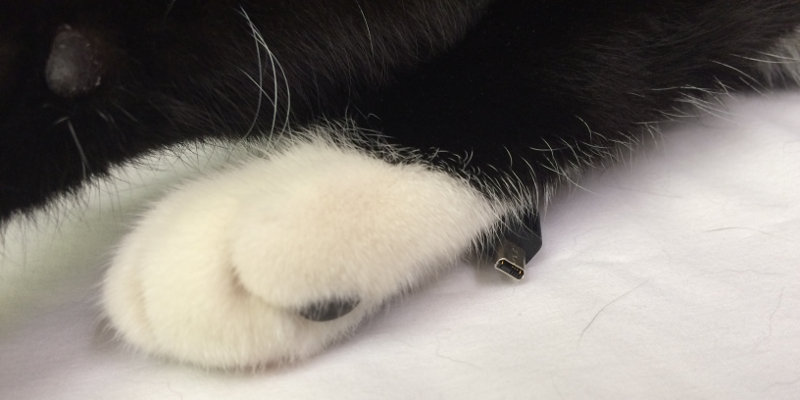 CAB-MUSB-HP – Proprietary connector, made by HP.

CAB-MUSB-TDK – Proprietary connector, made by TDK. 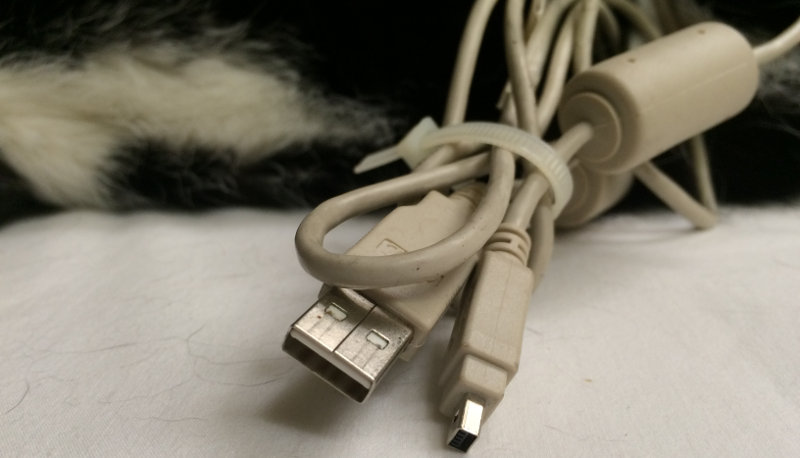 Proprietary connector. I think this is for Nokia phones. 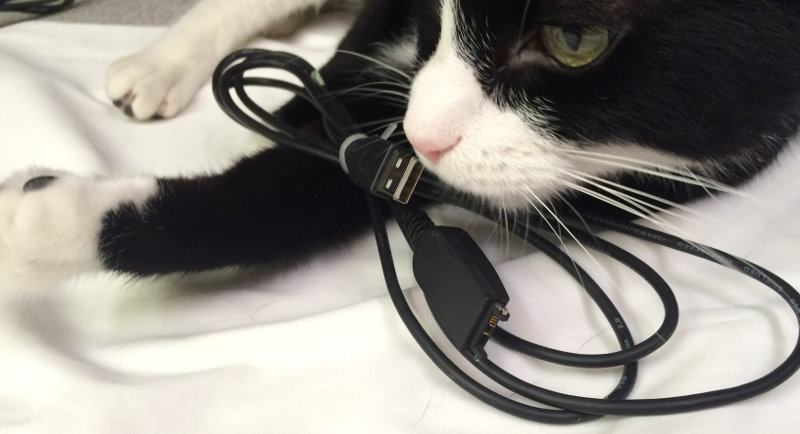 Hope this helps. If you find something else, let me know and I'll add it to this post. Always, 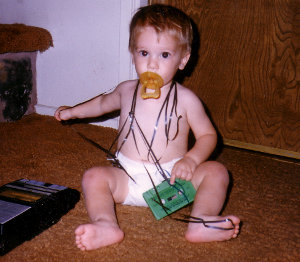 How to Split Open Your Oven Door to Clean the Window

Hey Mom, Oven doors are a lot like people. It's easy to clean the surface, to scrub and soak…

How Verizon and AT&T are Ripping Off Seniors

Hello again, Mom and Dad, While searching for a senior-specific cell phone plan for Nana, I was shocked to…