While searching for a senior-specific cell phone plan for Nana, I was shocked to see what was being peddled as a senior discount by the major carriers. I don't want to accuse Verizon and AT&T of ripping off seniors, but their Nationwide 65 Plus and Senior Nation 200 plans are rip-offs.

This nice couple probably wouldn't look so happy if they knew they were being bamboozled by a billion-dollar company.

Verizon's current flagship plan, the ebulliently-titled More Everything plan, is both less expensive and less hazardous than their senior plan. It's far less likely to incur those mythical surprise charges that mortify seniors, evoking the overage scare of late 90s and early 00s, when nightmarish chain emails told of hypersocial teenagers who amassed 300-page, multi-thousand-dollar cellular phone bills following a blissful month of rapid-fire text messaging with their crush and/or BFF.

The corresponding landing page on Verizon's website features a pair of smiling, silver-headed grandparents enjoying a carefree stroll along the beach, probably barefoot, likely wearing linen pants, pausing to gaze adoringly at a cellphone, admiring their latest grandbaby or a cat or something. 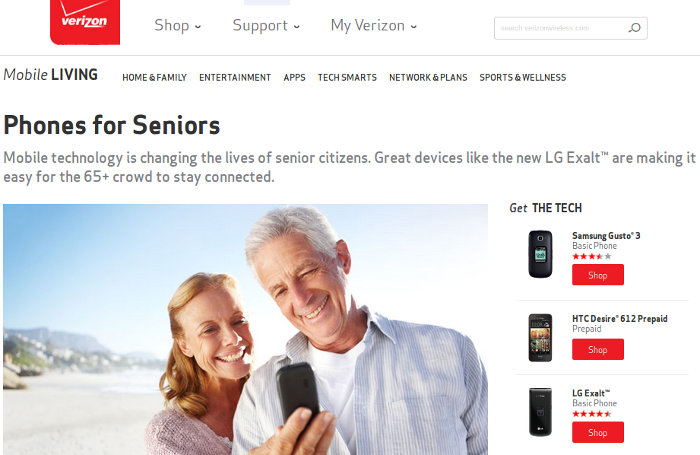 These plans are predicated on the supposed conventional wisdom that stuff tailored to seniors is discounted heavily, presumably as a public service to those living on Social Security, or as a tacit thank-you to the greatest generation. I arrived at the details page for Verizon's senior plan following a Google search for “cell phone plans for seniors,” and even my inner John Wayne was stirred as I read first sentence, Not a big talker? The opening hook goes on to read, We've got you covered. With our Nationwide 65 Plus Plans, you'll get a lower amount of minutes, for a lower price. Actually, it's not a lower price, but if I was a tech-illiterate geriatric, I might be inclined to believe my search for the bargain plan was over, because seriously, what kind of cynical jerk would think that the senior plan wasn't the best deal?

When I first saw the breakdown – just 200 weekday minutes and no text or data – all I could think was “overages.” Which is normally fine – risk of overages is the trade-off for a good bargain. But this isn't even a regular bargain, let alone a good one. If tragedy strikes and Nana needs to use the phone for more than three hours and 20 minutes that month, all between the hours of 7:00am and 8:59pm, she's going to encounter overages that will nullify her savings almost immediately. Send/recieve a text? Overage. Accidentally use a bit 'o data? Overage. Somebody subscribes her to Cat Facts? Massive overages. 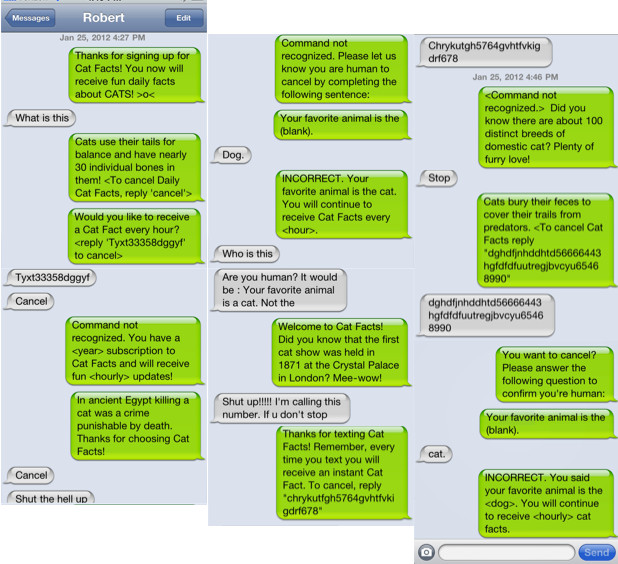 Intuition tells me that administrative oversight is to blame for the continued existence of these plans. The discrepancies are too glaring. Maybe someone at corporate flagged the issue, but these dinosaurs were preserved by bureaucratic muck. I can't find a single reason why they're good deals, or why they exists at all. The real doozy is that they offer add-ons like unlimited text messaging for $20, when text messaging on every other plan is unlimited as a standard feature. But who wouldn't know something like that? Seniors.

Oddly, these plans have remained completely unchanged since they were implemented in late 2007. They may have been bargains nearly ten years ago, before upstarts like T-Mobile arrived and forced the presiding behemoths to slash prices. But who wouldn't know about that? Seniors. Normally I wouldn't care if people were stupid enough to get ripped off, but these plans specifically target the consumer group most vulnerable to exploitation in this arena. 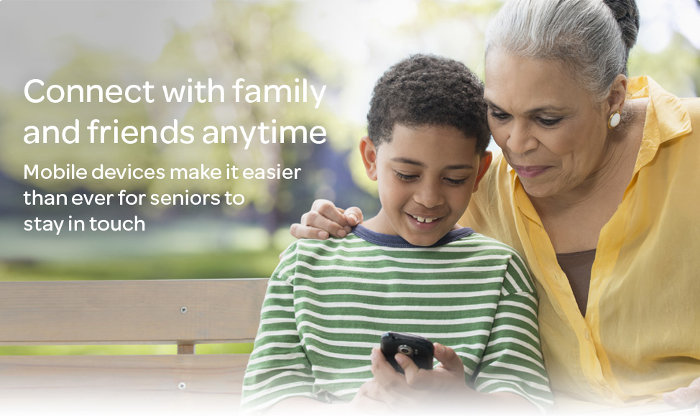 The fact that these plans were ever more expensive than any other plan, if even for a day, is a travesty. If they were targeted at tech-saavy college students I'd have a good giggle over this, but unfortunately they were targeted at people who probably still own a rotary phone and think "iPhone" is a statement made by an alien in a Spielberg film.

As you can see from the many screenshots posted here, AT&T's landing page features a wonderful collection of joyful elderly folk engaging in merry activities, taking selfies at a sun-drenched pier, cuddling with the grandkids as they watch something on a smartphone, or using technology to “live an active lifestyle.” If you're getting ripped off, but you don't know it, does your billfold make a sound?

If I had to come up with an excuse for Verizon, it would be that the More Everything plan is only cheaper due to the $10 line access discount applied when choosing a basic phone, part of a series of discounts implemented earlier this year, ostensibly to curb the customer exodus toward discount providers (they recently offered ex-customers a $300 voucher toward a phone upgrade if they returned, the commercial for which was pretty funny).

Even if the discount is ignored, the senior plan's meager savings don't justify the risk of punitive overages that would otherwise be mitigated by paying just $5 more per month, an amount that, with the "senior discount" plan, would be incurred by talking for just 12 extra minutes. I mean, if you're going to tell seniors you're giving them a discount, give them a discount! Don't give 'em half the pancakes for three-quarters the price and call it a great deal. If the lever pullers at Verizon can implement a $10 discount for their flagship plan, they could have done the same for a plan intended to be, and marketed as, a senior-exclusive bargain. But they didn't.

AT&T's senior plan is virtually identical to Verizon's. But for just $0.01 more, their basic prepaid plan offers unlimited voice and messaging, as well as a small data allotment. Plus, if you opt-in to autopay, you get a $5 discount, making it both less expensive and better! And still the senior plan is available, being marketed to the people most vulnerable to being swindled.

So where can you go to get a real discount for being a technophobic senior? Unfortunately, Verizon's and AT&T's service coverage is vastly superior to the discount carriers, T-Mobile and Sprint. If you stayed only in cities, it might not be an issue, but the primary purpose of a senior plan is to have a line of communication in emergency situations, so heat stroke-prone seniors can call AAA if their car breaks down on the lonely highway to Laughlin, NV. 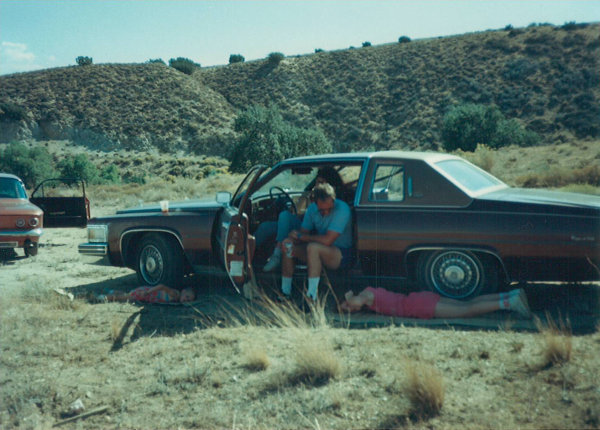 1987. That's me lying next to the front tire, along with my dad, my sister, and presumably my mother's legs. The car remains unidentified. No one is able to recall any other details about this photo.

A company called Great Call caters to seniors, and their plans start at $15/mo for 50 minutes. Paltry, but for emergencies it's probably fine; the risk of encountering overages, $0.35/minute and $0.10/txt, is justified by the low cost. They use Verizon's network, so the coverage is good. However, you have to use their phones – they're the company that makes those Jitterbug phones, which cost $99. And voicemail is an add-on, strangely, that costs $3. They offer other plans with significantly more minutes, but they cease to be cost effective versus similarly-priced plans from Verizon at AT&T, both of which will basically give you a phone if you sign a 24 month contract.

It's also good to know that, by law, 911 is required to work on all phones, whether they're connected to a network or not. Keep an obsolete phone and its charger in the glove compartment of your car, just in case.

I'm not sure if any of this matters to you because you just come to me when you need help with tech issues, but since you're both heading into senior-discount territory, I think you should be cognizant that stuff like this happens, even from supposedly reputable companies. Stay safe. As always, 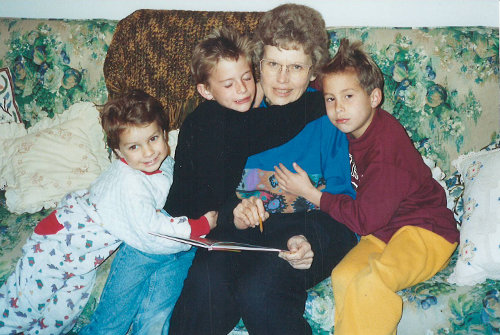 Homepage preview image: 1994, photo taken by my aunt, to be used for a custom family Christmas calendar.

Which Electronics Cables are Useful and Which are Obsolete (with Cats!)

Hi Mom & Dad, Last time you ventured into your storage closet, you valiantly attempted to organize the mass…

Why Pluto is Not a Planet, and Why We Should Stop Stalking Our Exes

A clean break is always best. If you find your expectations wanting, you shouldn't hesitate to part ways. What…