Every time Dad's birthday rolls around you always pose the same question to me: “What should we get for your father?” Inevitably, that question pops up again as Christmas looms, and then again for father's day. So, as I ponder what to get him for his birthday on Tuesday, I figure this would be a good time to outline my approach to gift buying for Dad. It should be noted that this approach is applicable for any father, regardless of age. It's simple: just approach this store. 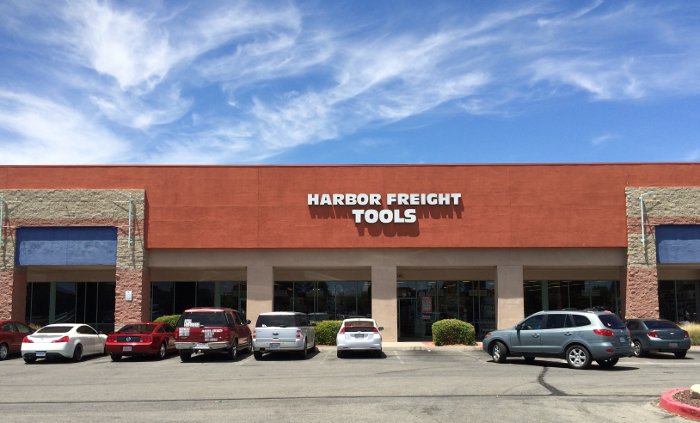 If that part of Ebay (you know, the 99¢-but-ships-from-China-in-three-to-six-weeks part) was an actual retail store, it would be much like Harbor Freight. This place is like Bed Bath & Beyond for guys who like to spend time in the garage. It sells everything they want and everything they didn't know they wanted, all for prices so low they'll scratch their heads in a perplexed manner, but only for a moment before they burst into giggles and reach for their overstuffed dad-wallets. 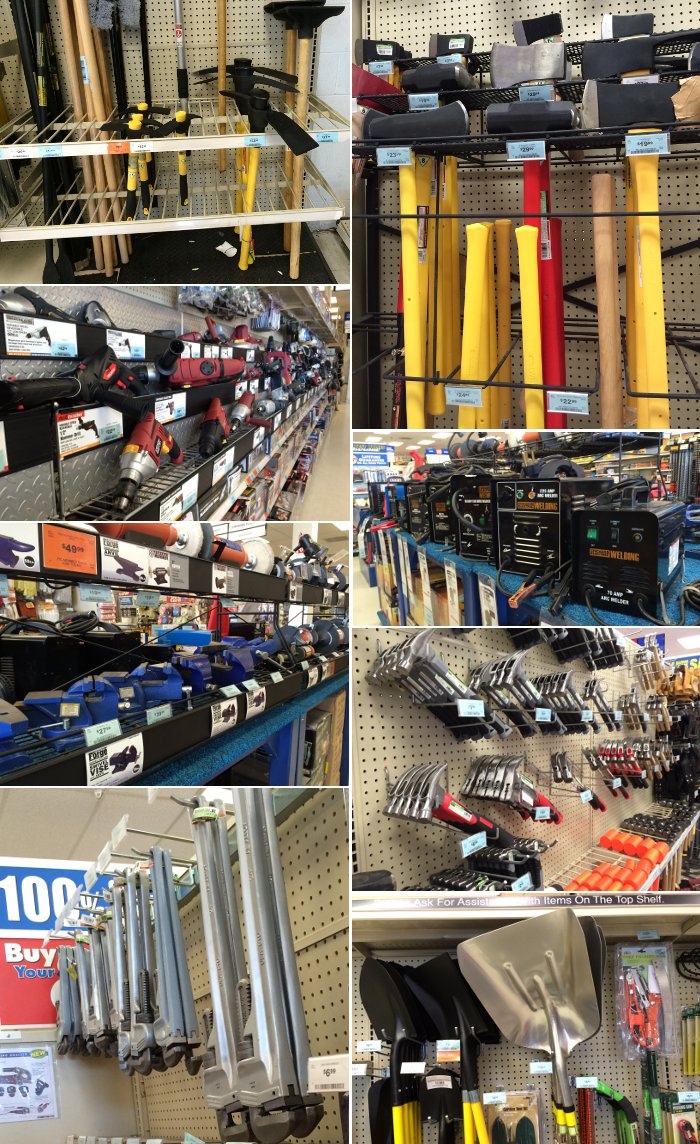 When I took karate classes as a kid, Dad purchased a samurai sword for me from Harbor Freight for $19.99. Thanks to your motherly instincts, I was never allowed to use it and subsequently no pictures of me with it exist (though all my limbs still do, so thanks, really). I still have it, though. 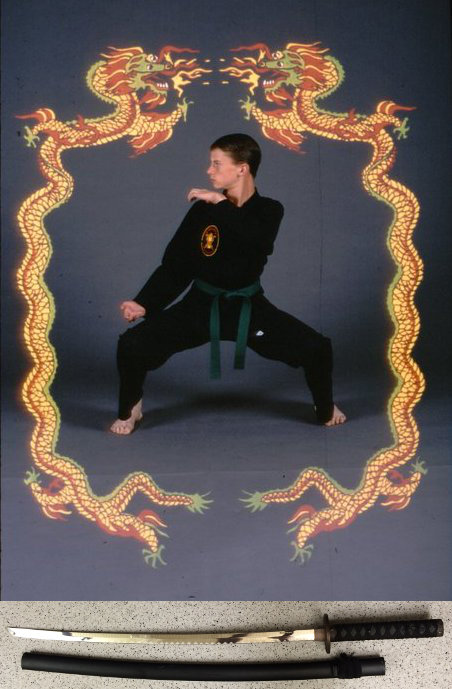 If your goal is to give him the one thing he doesn't already have, you're going to encounter an impregnable roadblock. He's already purchased everything he wants because he's a grown man, and he's purchased all that stuff at Harbor Freight. Everything they sell is inexpensive enough to allay the guilt he would normally shoulder upon committing an impulse buy. At $30+, an angle grinder might be something he would pass on. But for $15, how can he say no? 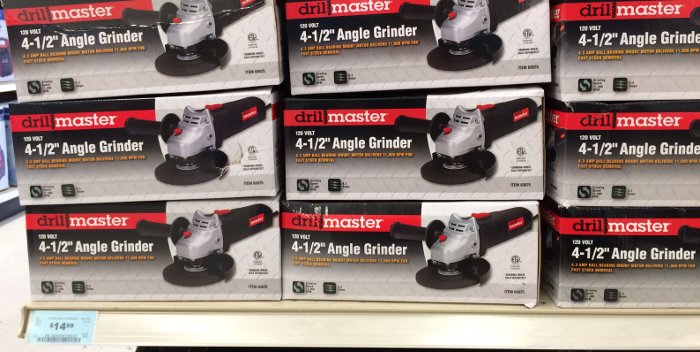 You have to get him something, though. You can't just say, “Happy Birthday,” and give him a hug. This is America. We love stuff. Thoughts and emotions are for hippies. Birthday cards are just a formality, colorful delivery casings for fungible paper. You, unfortunately, can't cut him a check or hand over a fistful of cash. He doesn't want your money because your money became y'all's money when y'all signed the marriage license. You may as well take all the bills out of your purse with your right hand, give them to your left hand, toss half of them, and then put the remainder back in your purse. Whoa... did I just come up with the ultimate metaphor for marital finances?

So where do you go to get a gift for the man who has everything? Harbor Freight. Perplexing, I know, since I just said he already has everything he wants from HF. The beauty of HF is that their products are essentially “disposable.” In my experience (and in his) many of their items tend to be shoddily crafted and easily broken. But they're so inexpensive that it's often cheaper to toss and re-buy than it is to purchase an expensive, high-quality product manufactured by a reputable company. Buy-cheap-buy-twice doesn't apply because buying twice, or even thrice, is often still less costly. This isn't universal, mind you – some of their items are built well. Their angle grinders work wonderfully in spite of their low cost, but their electric drills go kaput quickly. He'll buy a half dozen whenever they go on sale for around $12 each, and then toss them when the bushings inevitably give out. There's a couple in the trash right now. 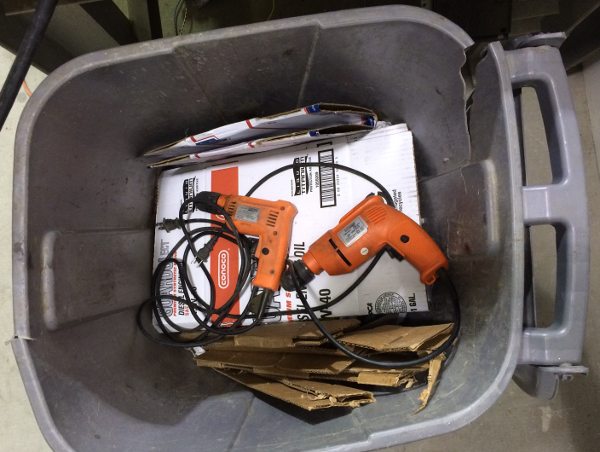 While not immediately intuitive, this all adds up to the fact that you can purchase anything at Harbor Freight without worry. He may have already purchased the thing you get him, but there's a very good chance it's already broken. So don't limit yourself. Go nuts. He'll like anything you get. Anything. Seriously. If it's not broken it's likely because he's not yet used it, so keep the receipt so he can return it if he wants (there's no point in hiding the price; he peruses the catalog every time he uses the bathroom and has memorized all the prices). He won't mind returning it. He was probably already searching for an excuse to go. I'm sure he knows the names of all the cashiers.

Now, what should you get there? How about an electrified fly-obliterating badminton racket? $3.99. I don't care how old he gets, give him two of these, put him under a bright light after the sun goes down, and he'll have zappity-zap fun for hours. 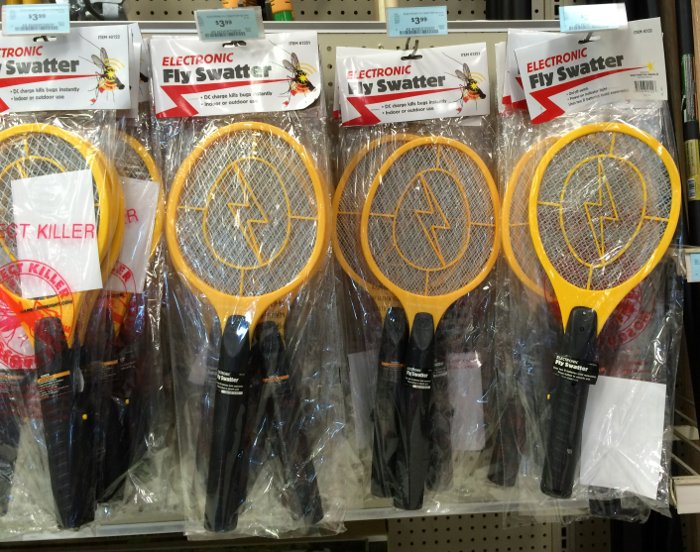 Finding your home to be deficient in AMERICA? Harbor Freight's got your back. 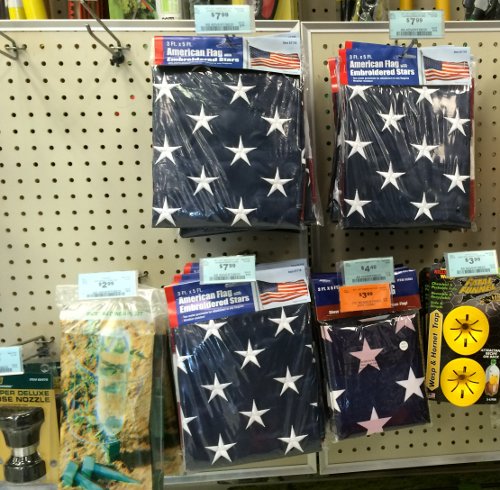 Chainsaw blade getting to be a little dull? 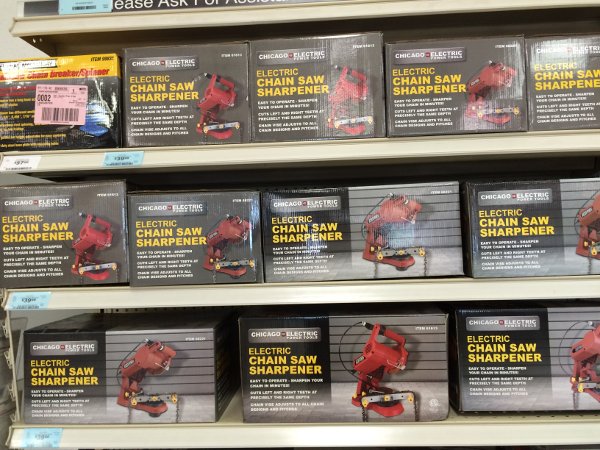 Well, I might have to backtrack a little on this one – he's already got a chainsaw-blade sharpener and I don't think he's used it yet. See if you can find it in the next pic. It's there, I promise. 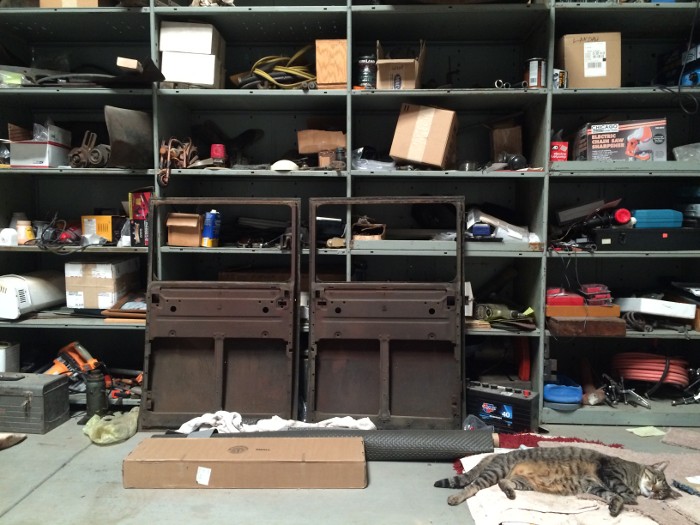 Ever heard the word “pneumatic” before? Go to Harbor Freight and you'll become very familiar with it. 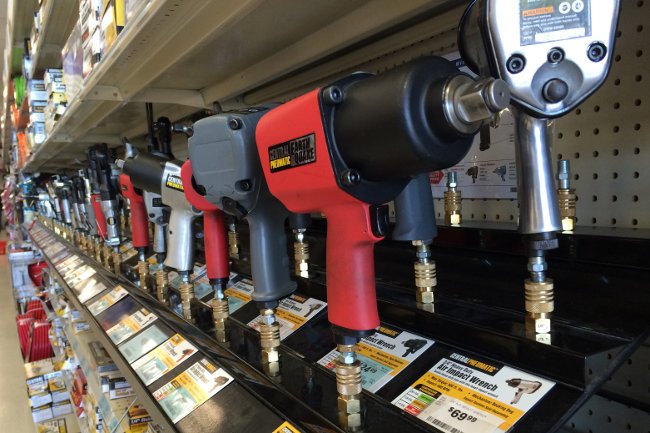 How about trailers that float like somebody's planning to tow a magical barbeque grill to a quidditch tailgate party? 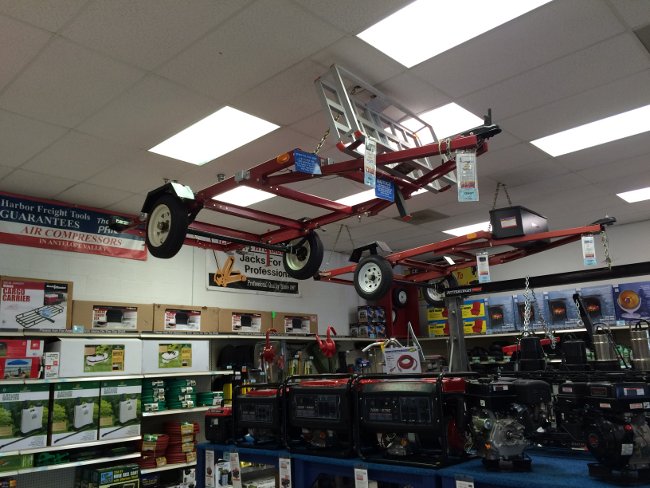 When I said they sell everything, I meant it. In one image I was able to capture a home hair care kit, cordless three-head rechargeable shaver, wireless headphones, waterproof rechargeable shaver, mini-vacuum attachments kit, nose hair trimmer, and Working Hands hand cream. 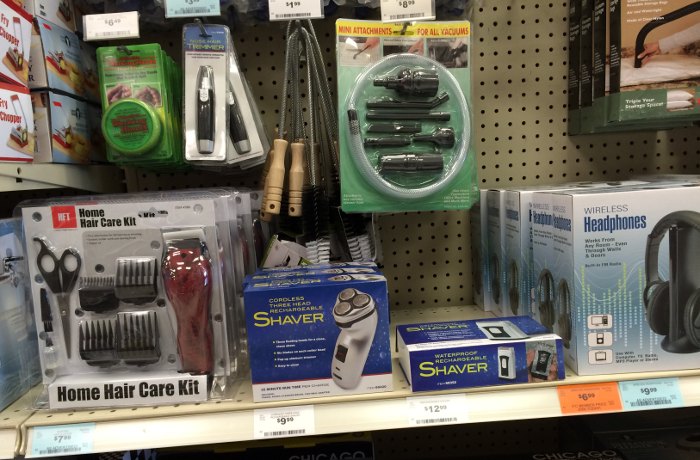 Not impressed by that? Here's an Aerocopter toy, an adjustable cane, a stainless-steel shoehorn, a jumbo universal remote control, a personal sound amplifier, hearing aids, a pill cutter, a portable blood-pressure monitor, and a suction-mount handle thingamajig. 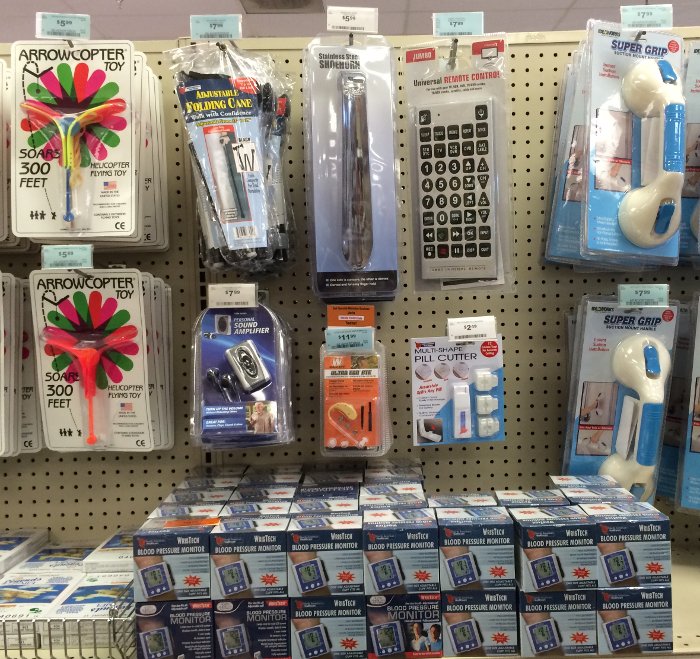 Still not impressed? How about an electric food slicer, a multi-load can crusher, a hamburger press, a 2.5 liter ultrasonic cleaner, French-fry chopper, cast-iron cooking pot, bathroom scale, electric meat grinder, 14” tire-rim clock, fire extinguisher, and a food dehydrator? Plus most of the stuff from two pictures ago. You could push your shopping cart to just this end of just this one aisle, load up, and call your Father's-day shopping complete. Somebody needs to tell Wal-Mart to up their game. 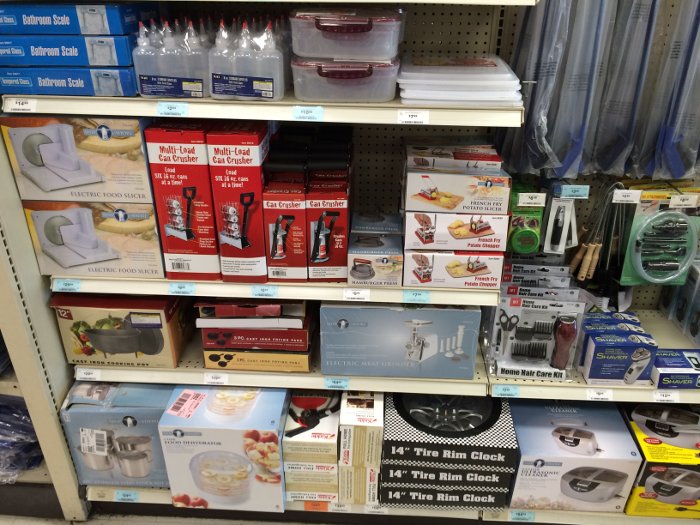 Didn't believe me when I said he got me a samurai sword for less than $20? Have a look at this 18” machete for $5.99. You're not going to find that on the rack at Home Depot. 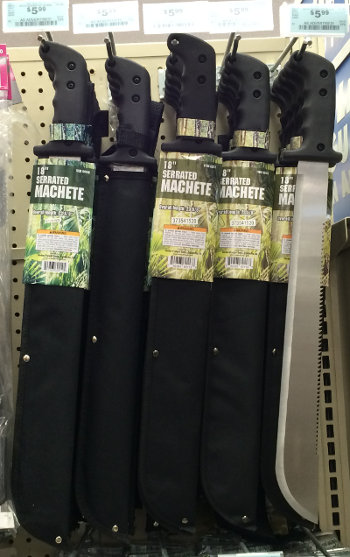 Here's a non-comprehensive list of things that cost more than a Harbor Freight machete:

Perhaps he'd like a wheelchair, or some solar panels, a $2 wooden model airplane, or a set of Magic Moving Sliders. 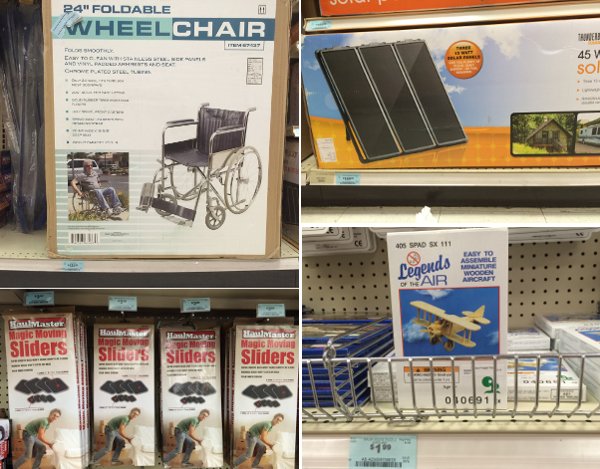 I bet this conversation took place at one point –
Harbor Freight employee: “Where should I stock these propane regulators?”
Harbor Freight manager: “Next to the metal detectors.”
HF employee: “Under the solar-powered lanterns?”
HF manager: “Yeah, above the tripod-mounted spotting scope, to the right of the fish finders.” 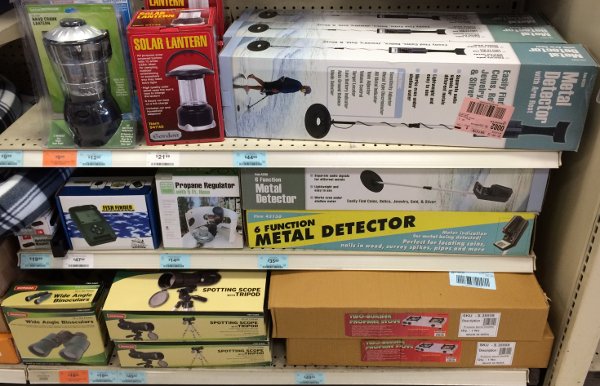 I can hear you now: “Come on, they can't have everything. I bet they don't stock a selection of digital postal scales.” 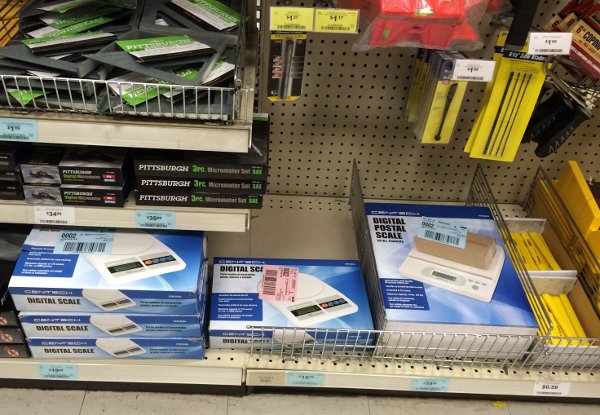 No matter how old and curmudgeonly the dads of the world may become, there's still a kid inside each of them, and Harbor Freight knows what he wants. Where's the random-toys aisle at Lowe's? Doesn't exist. But he could get an radio-controlled boat and a wrist-stabilized slingshot at Harbor Freight if he felt so inclined. 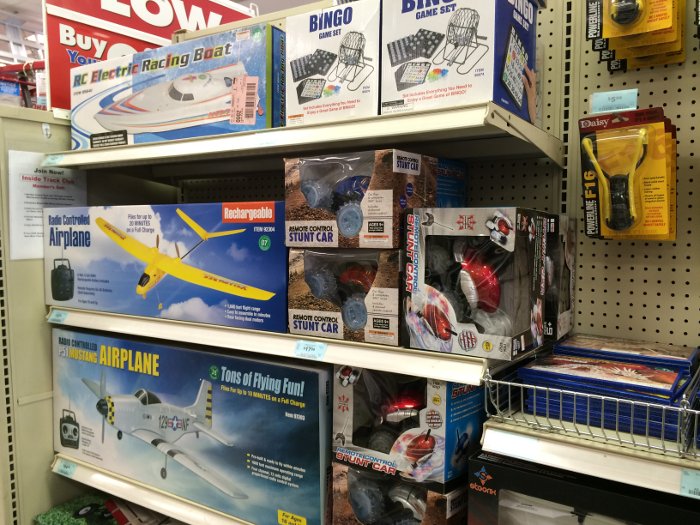 Even if you don't know what it does, get it anyway. He'll find a use for it. 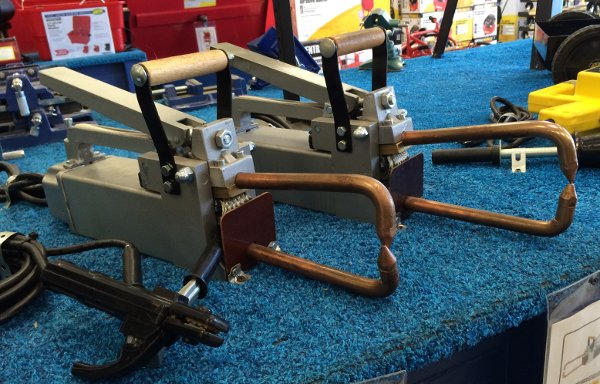 So, after all this, what am I going to give him for his birthday this Tuesday? 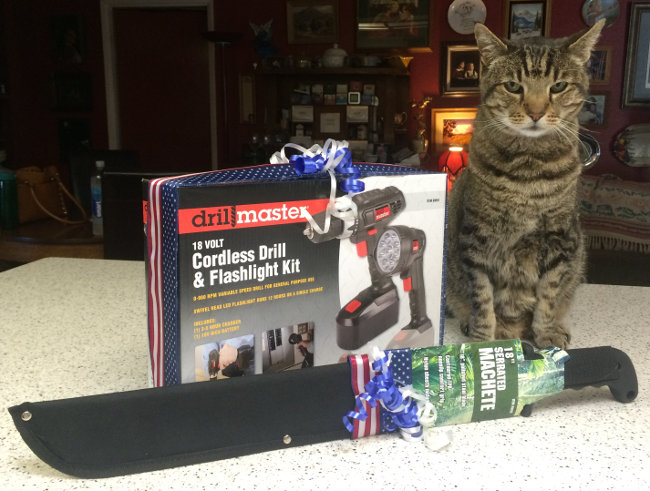 I can see you now, rubbing your forehead at the sight of that machete. “Honey, what's your father going to do with a machete?”

You can do it. I got your back. 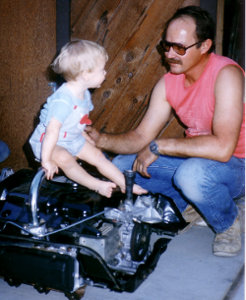 Other than one detail, this post is simply an amalgam of the most useful instructions from every other Linux/…