So you just noticed that your battery-powered digital blood-pressure monitor has an electrical inlet, but you don't recall the location of the AC adapter, or if it even came with one. 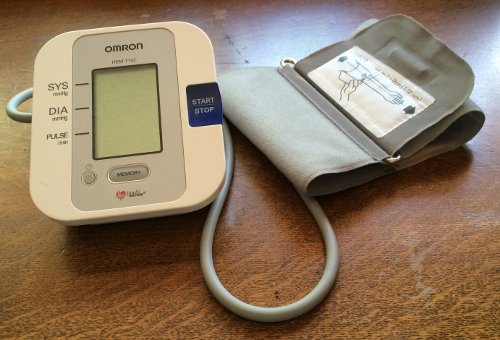 But lo! After living in the same home for thirty-five years, your non-clinical hoarding tendencies have finally paid off! You have amassed an entire basket of AC adapters, a motley assortment of power-transforming orphans. “I don't know what this goes to,” you thought to yourself the last time you reorganized the storage closet, “but I better not throw it away, just in case.”

That day is today. Maybe. 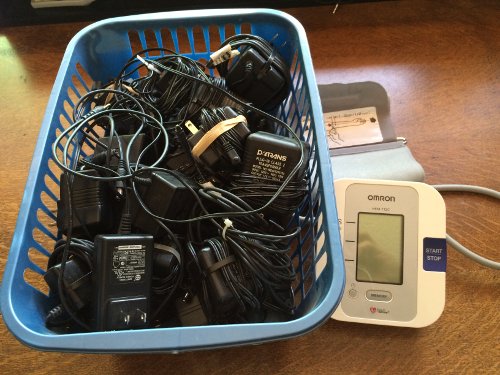 “I found three that fit,” you said to me. “And one more that’s kind of loose, but still stays in the little electricity hole on its own. But it’s not as snug as the other three, so it’s probably not the right one. But I don't really know.”

Today we’re going to learn a little about electricity. We're going to need to read very small print, so it would be a good idea if you first acquire one of these: 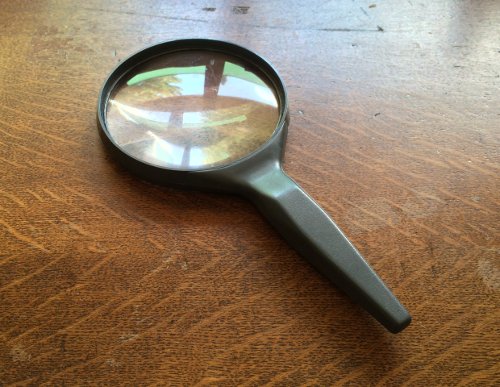 To power your blood-pressure monitor, we'll need to find a six-volt AC adapter, because the monitor indicates that it requires six volts. 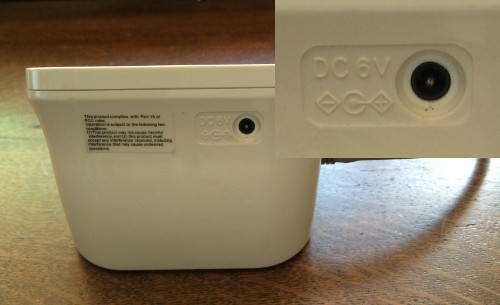 By finding the adapters that fit snugly in its electricity hole, you’ve completed the first step toward selecting the correct adapter. The second step is to ensure that it converts from AC to DC. Check that DC is written somewhere around the output information. 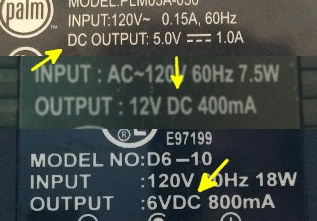 Often the symbol for direct current will be used instead. It's composed of a solid line set over three dashes.

Voltage defines how forcefully electricity moves. Amperage defines the amount that moves, or specifically to this case, how much electricity is available to be moved. If you select a 20W adapter that delivers 1A at 20V and use it to power a 20W device designed to receive 20A at 1V, you will fry the device because, even though it was designed to utilize a larger amount of electricity than the adapter could deliver, the adapter will ram its meager amount of electricity into the device with such force that it will fry the circuits - the device expected to be gently tossed a bowling ball, but instead it was shot with a bullet.

The only time the power rating is of any use is when only one of either volts or amps is displayed. In such a case, the unit that is not displayed can be determined using the power rating. V=W/A, and A=W/V.

In this case, the blood-pressure monitor supplies information in volts and watts.

We need an AC adapter that provides at least two-thirds of an amp, 0.66A, or 660mA, where mA is a milliamp, one thousandth of an amp.

And so it follows that the third step is to find an adapter that supplies power at 6V. Exactly 6V. If the adapter’s voltage rating is lower than the device’s, it won’t supply sufficient power. If it’s higher, it will forcefully inject too much power and likely fry your device, or at least burn a fuse, which will render the device effectively dead. 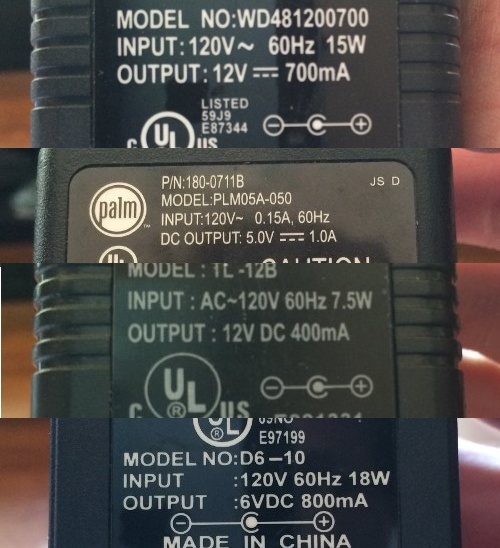 The fourth step is to determine polarity. Polarity defines which direction electricity will flow through your device, which determines the direction the tiny motor in your device will spin. If it spins the wrong way, it may break the device. In this particular case, the pump on your blood-pressure meter will probably be fine (it simply won't function properly), but it will likely damage the digital display. Avoid catastrophe by ensuring that the + sign is connected to the little dot in the middle, and – sign is connected to the C thing around the dot. This is the symbol for positive polarity.

While not an industry standard, they are almost always configured in this manner, but I have seen cases where the polarity is reversed from the norm. It's always a good idea to check and make sure that the polarity symbols match on both the adapter and the device.

Check closely. Believe it or not, the two polarity symbols shown below both indicate positive polarity. 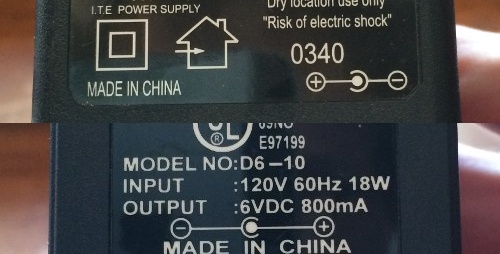 The final step is to determine amperage. If the amperage delivered by your adapter is lower than that required by the device, the device will operate only in a limited capacity. In the case of your blood-pressure monitor, it means that the pump probably won't be able to produce adequate pressure to secure an accurate measurement, if it will even work at all. If the amperage supplied by your adapter is greater than that required by the monitor, there will not be an issue because the monitor will only use what it needs (how nice!).

What if none of the adapters work? Not to worry, you can buy them anywhere. Your local thrift store has dozens, if not hundreds. 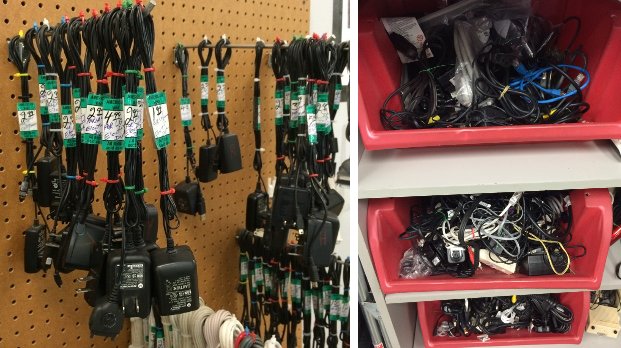 Now for the big reveal: which of the adapters will work with your blood-pressure monitor? If you inspected the images closely, you would have noticed that I found a 6V adapter delivering 800mA - same voltage and slightly higher amperage. It's a good match, but will it fit?

Your blood-pressure monitor probably didn't come with an adapter. You can get one on Amazon for about $10, but I would recommend that you continue to use batteries.

For mobile devices, you can freely interchange chargers as long as the adapter converts to USB, as is the case with the adapters pictured below.

While the amperage output can tend to vary a bit, all USB ports distribute power at 5V (the adapter may read 4.9 or 5.1, but as long as it's a USB port, it adheres to USB standards), so the only issue is that the device may charge slowly if the amperage supplied is lower than that supplied by the device's original charger. 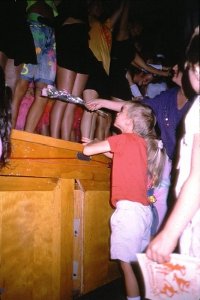 Dear Dad and Mom, It's still there. The button did not disappear. It's always been there. I've assembled photographic…

How to Read Garfield

Hi Mom & Dad, When I chose this week's topic, I thought it'd be fun (well, interesting) to explore…